Bandwidth 101: How Much Is Enough? How much is enough?

As schools become increasingly dependent on digital content for learning, the need for more bandwidth is constant. In the classroom, it isn’t unusual to see files transferred to and from the Google Cloud, content shared from one device to another, and educational Youtube videos streaming all at the same time. It is paramount that a school district’s network is capable of handling the needs of students and teachers to avoid disruptions in learning.

Generally, internal network connections fall within three classes of bandwidth. 100Mbs and 1Gbs are very common for desktop connections. 1Gb and 10Gbs are usually in place for building network uplinks and campus WAN connections. Internet connections are commonly in the sub 1Gbs range, but with recent changes in technology and pricing, many schools are pushing past that 1Gbs barrier. Planning for current and potential bandwidth requirements is vital to maximizing funding.

On average, a network will tend to perform in a predictable manner. This is referred to as a baseline. In order to assure a network is capable, you must know the amount of bandwidth currently flowing through it and know where your peak flows currently exist and how those compare to historical trends. The best solution is a visual network monitoring solution that includes a map of your network topology along with a historical flow of data. 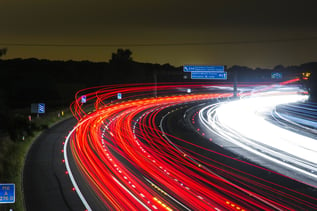 When the calls come in that the network is down or slow, it can be caused by many different factors. It could be that too many users are connecting to an access point and saturating the available bandwidth that it can supply. It could be that a link between buildings is being completely consumed by a server backup job. Usually, it means that the available bandwidth from the ISP is being used up completely.

This bottleneck could be caused by normal usage, such as an Apple update saturating the network, or it could be something malicious, such as a DDoS (Distributed Denial of Service) attack where a botnet of zombie computers have been called to send just a few Kbs of data each to your location. As all of that data comes together, it saturates the Internet pipe just like how a few cars on a multi-lane highway can come to stop when they attempt to merge into a single lane. This bottleneck can be determined by looking at the network graph of the data flowing on your ISP’s connection to your firewall.

A network monitoring solution is important as well. Imagine a single computer is downloading tons of music or video files illegally through BitTorrent. It would be impossible to track down this misuse of technology without some sort of a visual solution to show your network flow. With a network monitoring solution in place, a school district can track that flow through their network until they narrow it down to a specific port on a network switch.  From there they could track down the device and remove it from the network.

There are a large number of tools available that will give you the information you need to understand bandwidth usage. Those that are easy to use are usually very expensive and those that are cheap are often very difficult to configure. At Five-Star, we have developed our own monitoring solution built on an open-source platform that we call Five-Star Networking Tools (FSNT). Deployed physically or as a Virtual Appliance, it allows for a visual topology of the network. With just a click on any device in that topology, the bandwidth flow on each port pops up. It also sends alerts when specific thresholds are breached. FSNT allows school districts to easily track down any anomalies that inhibit the flow of data to your end-users.